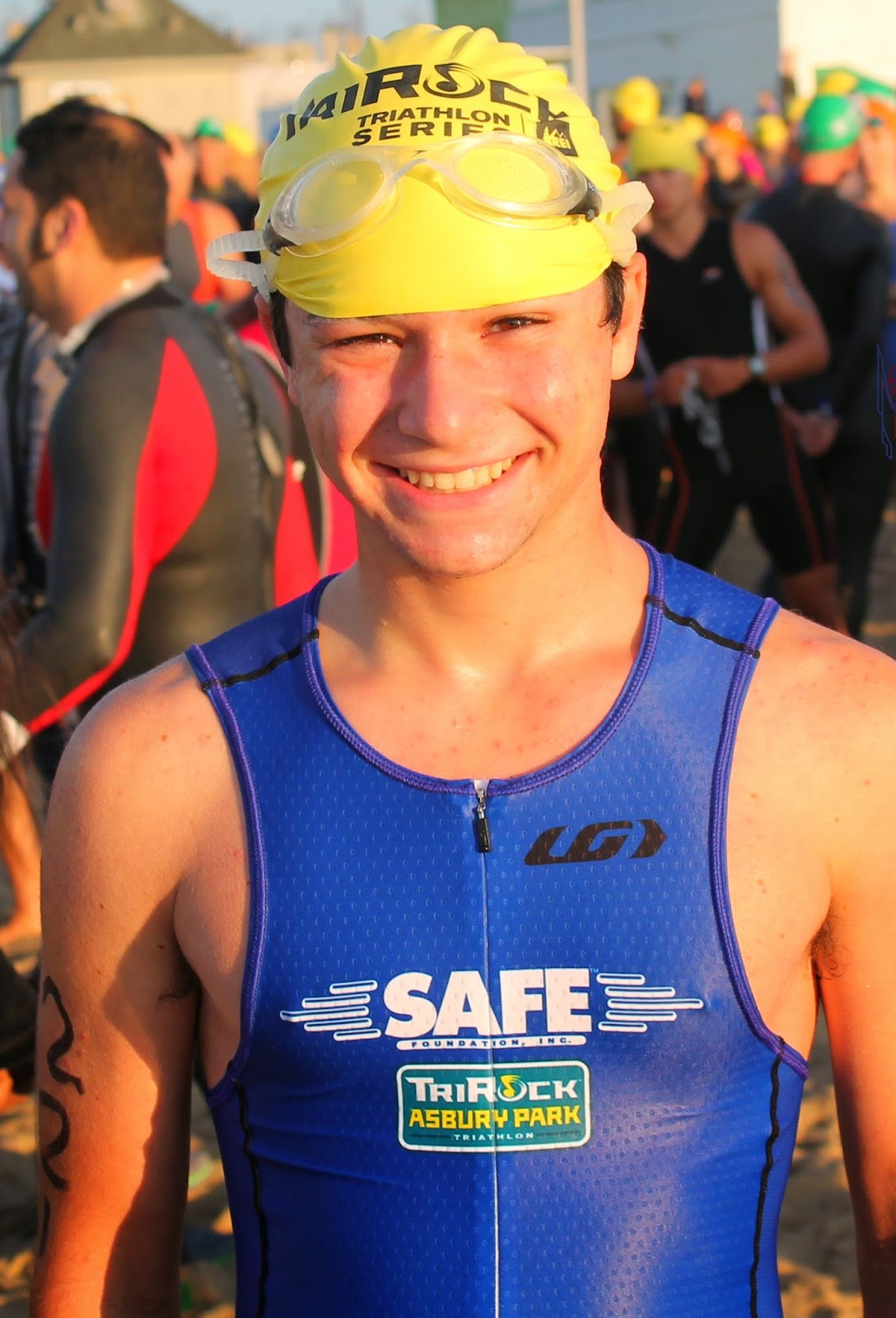 As I arrived at the Asbury Park boardwalk for The SAFE Foundation’s First Annual Triathlon on August 25th, I could feel the excitement in the air. It was six in the morning, but the place was alive! The SAFE Foundation had put together a team of close to 50 triathletes to swim 500 meters in the ocean, bike 10 miles, and then run 3.1 miles. Once in our SAFE tri-suits, we made our way to the beach. We stood in the chilly morning air, eager to jump in the ocean, get our blood moving, and start the race.

At 7 A.m. the horn sounded, and we were off! We ran into the water, jumping the waves, and then, stroke by stroke, kept on going. As I rounded the last buoy, I breathed a sigh of relief.  When I neared the shore, I suddenly felt a burst of energy overcome me. Once on sand, we ran quickly to the transition area, where we dried off, put sneakers on, and jumped on our bikes.

Down Ocean Avenue we went for the ten mile loop, and pedaled hard to make up for lost time. It was a magnificent sight seeing so many cyclists racing against each other.

As I made my way to the end of the bike course, the sun started to beat down. I took a one-minute break for a refreshing drink, and then quickly changed to my running shoes for the last part of the race. Trying to keep my breath steady, I ran with fellow Team Safe members. When I passed the last mile marker, I suddenly got another burst of energy and took off. I bolted to the finish with a cheering audience on the sidelines. Each team member came in with huge smiles. We all felt so accomplished. But most importantly, we knew that we raised money for a worthy cause. It was an amazing event and hopefully the first of many to come.

Written by  The SAFE Foundation

On Sunday, August 25th, 36 Team SAFE triathletes woke with the early morning dew and headed out to take on The SAFE Foundation’s Triathlon Challenge in Asbury Park. “It was so great riding here in the dark, watching the sun come up.” Triathlete Leslie Kassin said.

At 7 A.M. with both the moon and the sun standing witness in a crystal clear sky, the athletes, wearing SAFE tri-suits (that conveniently dry off quickly for this tri-purpose) dove into the ocean for their first leg of the race: a 500 meter swim. Then, the swimmers emerged from the water to take on the next challenge: a 10 mile bike ride. With hundreds of other participants, our SAFE triathletes rode from Asbury Park, around the Deal Lake, up Ocean Avenue to Lake Takanassee and back. Upon finishing, they cycled into a section of cheering fans. There, they raised their arms up to acknowledge the cheers, dropped their bikes down, and rushed to complete the last leg of the tri-challenge: a 3.1 mile run along the Asbury boardwalk. Finishers were greeted with water bottles, bells, music, and flashing iPhones.

Ike Dweck, Founder and Executive Director of The SAFE Foundation, smiled and remarked, “This is the new addiction – healthy living!”

When Bobby Dweck, Ironman, trainer, and participant was asked how he felt after the race, he said, “I’m speechless. This is the best feel-good-feeling there is!”

Chuckie Dweck, who stood with his children proudly gathered around him after the race, added, “Great time! Great cause! I’m hooked!”

Dave Balassiano reported that he learned to swim this summer three weeks before the triathlon. “I took my lesson with a swim instructor who chanted her teaching song, ‘Look at the fish. Listen to the fish…’ Believe me, when I was out in that ocean, that little chant helped me a lot! I feel really good about having challenged myself this way. That and the comradery from of being part of a great group of Team SAFE members was a fulfilling experience.”

Dave’s Brother Norman Balassiano almost backed out of the race due to injuries, but decided that he wanted to show his support to The SAFE Foundation. He said, “Without SAFE, I’m convinced that our community would have a much bigger addiction issues. It has become an epidemic in the U.S. and in New York. Just having SAFE in existence is preventative; it stems the problem. So, I ran ‘bone on bone’ to show my commitment to SAFE, and I felt Hashem watching over me when my son and I reached the finish line together.”

Ironman Joe Benun generously volunteered his time, hosting meetings, training participants, and serving as the events official photographer, snapping no less than 700 pictures! He said, “I really believe in challenging oneself this way because in doing do, you see the ability of the human body and the power of setting a goal. Today, Team SAFE served as an inspiration to others in the community and raised both funds and awareness for drug addiction and prevention.”

Joe’s mom and triathlete Monique Benun praised organizer and triathlete Isaac Setton saying, “He thought of every detail and followed through. He was very professional.”

Isaac Mograby, SAFE volunteer and Tri Organizer, said, “This is the first Triathlon the community has ever held, and it was great! What amazed me most was the upbeat mood in the air and how many athletes arrived early at the tent to have a Minyan.” He continued, “While we are now one year away from the next SAFE Asbury Triathlon, registration is fully open. This will give everyone ample time to begin training!”

A special thanks to the generous sponsors of the tri-suits and bags: Century 21, Crown Acquisitions, and The Angels of Debt.