THE DANGERS LURKING IN YOUR MEDICINE CABINETS 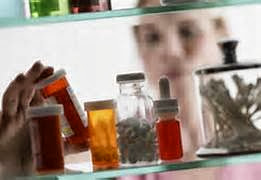 Every day, over 5,000 teens experiment with drugs for the first time. Most parents don’t realize that many of these drugs are not coming from the street, but rather from medicine cabinets in their own homes, or the homes of friends. With the easy availability and false notion that prescription (RX) and over-the-counter drugs (OTC) are safe, more and more teens, including those who would never use illicit drugs, are using these to get high.

A big part of the problem is that 60 percent of parents with teenagers do not take an inventory of their home medicine cabinets. In addition, only 17 percent of parents dispose of their unused or expired prescriptions regularly, so no one is keeping an eye on old pills that can still deliver a high.

Another part of the problem is that not so many parents are talking to their teens about it, even though teens report that parental disapproval is a powerful way to keep them away from drugs.

There are serious health risks related to abuse of prescription drugs. A single large dose of prescription or over-the-counter painkillers or depressants can cause breathing difficulty that can lead to death. Stimulant abuse can lead to hostility or paranoia, or the potential for heart system failure or fatal seizures. Even in small doses, depressants and painkillers have subtle effects on motor skills, judgment, and ability to learn. The abuse of OTC cough and cold remedies can cause blurred vision, nausea, vomiting, dizziness, coma, and even death. Many teens report mixing prescription drugs, OTC drugs, and alcohol. Using these drugs in combination can cause respiratory failure and death.

All of this does not mean you need to get rid of medications your family needs. You need only to make them less accessible. One mother of a 16-year-old says she does this by keeping prescriptions in a locked cabinet in her room. Some parents, on the other hand, believe it’s enough to simply verbally warn their children and threaten punishment if medicine abuse becomes an issue. One authority suggests that parents monitor pills by counting them or take it even further by taking these drugs out of the home and locking them in your office at work.

But don’t think that by keeping prescription medications under wraps, you’ve solved the problem. Teens get drugs from friends at school, dealers on the street, other kids who have legitimate prescriptions and even the Internet. So not only do you need to keep medicines out of your children’s reach, you also need to know who their friends are and be on the lookout for signs that may mean your child is abusing drugs.

Information for this article was adapted from Thirteen.org