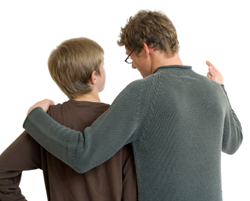 How a child is treated by the person who raises him can make all the difference in what type of life he’ll lead. A new study says that if one was raised with criticism, yelling, or threats, he’s more likely to be anxious or depressed as a young adult. Once a person is thus affected, his likelihood to become involved in substance abuse increases, as he may turn to drugs and alcohol to mask pain and discomfort.  Research does indeed indicate that those with anxiety disorders are two to three times more likely than the general population to have an alcohol or other substance abuse disorder at some point in their lives.

Research has linked verbally aggressive parenting to changes in children’s brain development and to personality disorders later in life.

Researchers found that even if another parent (or that same parent) expressed plenty of affection, the harmful effects of having a verbally aggressive mother or father persisted.

Being raised with yelling can be as damaging as actual physical abuse.

Meghan Leahy, a mother of three and a local parenting coach told the Washington Post, “If you yell at your child, you either create somebody who yells back at you or someone who is shamed and retreats.You’re either growing aggression or growing shame.”

The good news is that children CAN AND WILL behave without yelling, hitting, threats, and bribes. Here are some tips to help you discipline in a positive and productive way:

Some of the information in this article was adapted from the following sites: PBS.org, Slate.com, ADAA.org, ABCNews.org, reutershealth.com