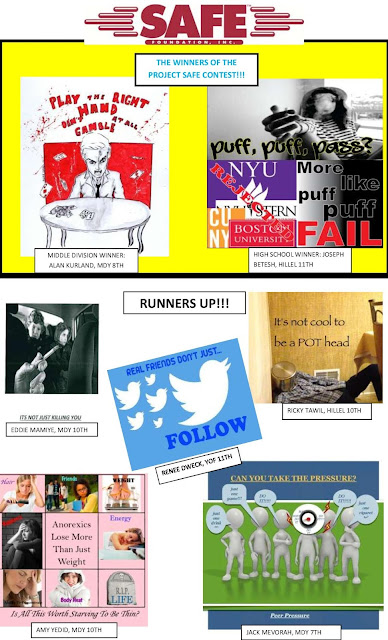 In early march, The SAFE Foundation launched a contest through Project SAFE in participating community schools. Seventh through twelfth grade students from The Yeshivah of Flatbush, Barkai, Hillel and Magen David Yeshivahs were all invited to create an ad that most powerfully and creatively conveyed a message that was discussed in their Project SAFE classes. The topics were: substance abuse and addiction, gambling, internet safety, self-esteem, body image, and healthy relationships.

During the two weeks that the contest winners were announced, the blog, where the results were announced, got hundreds of views! First, each ad that received an honorable mention award was posted. Then, the runners up were declared, and finally, the middle division winner and the high school winner were announced. Each ad was then posted on The SAFE Foundation’s Facebook, Twitter, Parenting Instagram (@safeparenting) and SAFE’s other Instagram account (@thesafefoundation), and colorful posters of the winning ads were posted all around the schools.

CONGRATULATIONS TO THE WINNERS FOR THEIR EFFORTS, TALENT, AND FOR SHARING THEIR GREAT MESSAGES:
The High School Winner: Joseph Betesh, Hillel Yeshivah, 11TH

The Five Runners up were: