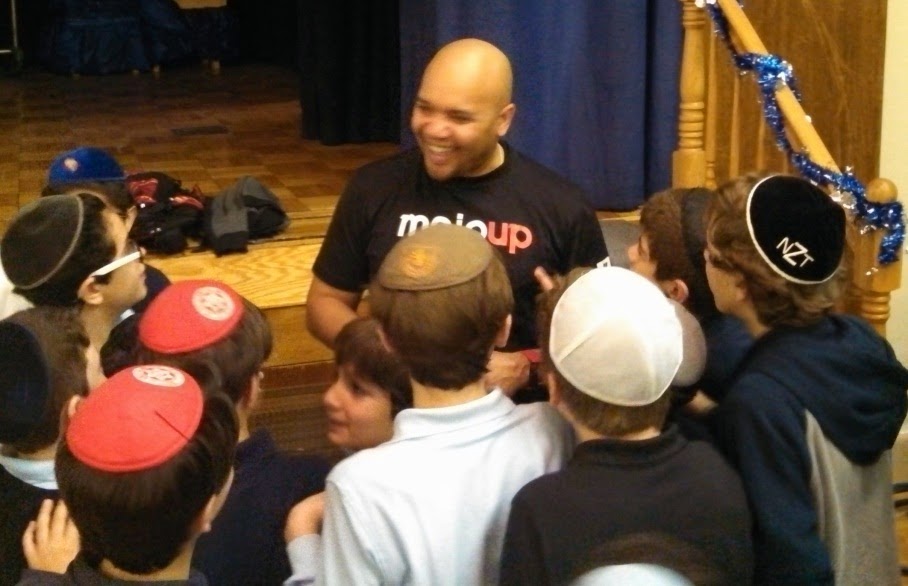 UMAD, MOJO SWAG, MOJO HATERS, MOJO UP! These are just some of the expressions The SAFE Foundation’s presenter Mr. MOJO, a world renowned inspirational speaker taught students in Magen David Yeshivah and The Yeshivah of Flatbush one December day. Mr. Mojo is a celebrity, known for his talent as a “Made Coach” in MTV’s reality TV show Made. He is also sought after by the NFL for his ability to inspire professional athletes. His present passion is to encourage students, parents, and educators to take the MOJO UP Anti Bullying Challenge and join him on his mission to change the world, one student at a time.

Riling up the auditorium crowd with claps, shouts, and even a game of Simon Says – rather, MOJO Says – Mr. MOJO excited and inspired close to 1,000 students (and the teachers as well) in just one day!

Yossi Sirote, Project SAFE’s Associate Director of Special Programs said, “MOJO was so charismatic, real, and kind. He connected so well with everyone!”

MOJO began by explaining MOJO. He shouted, “MOJO means that you choose to live at the highest level of positive attitude, positive energy, enthusiasm, purpose, and passion! MOJO SWAG is when you look in the mirror and like what you see; it is having the confidence that you can become successful! And UMAD? UMAD means that You Make A Difference!” MOJO continued, “For example, every day when you show up to school, you make a difference; you decide whether you wish to make a negative or positive difference. It is your choice. When you are about to say something, ask yourself – will these words I am about to say hurt someone or will they help someone? If the answer is ‘hurt,’ keep it to yourself. If the answer is ‘help’ – go for it!”

MOJO told a story of a girl who was teased in school for having such a very short haircut. The reason, unbeknownst to her classmates, was that she was recovering from cancer.

MOJO explained that we have a “normal box” and if people don’t fit into that box, we may treat them disrespectfully. He asked, “Can you MOJO UP and respect others’ differences?”

He then told another story about a girl named Carrie who was taunted by fellow students with cow sounds as she entered the school bus, because she was overweight. Carrie is now grown up. Carrie is MOJO’s mother. Her older sister, MOJO’s aunt, was on that bus too, but was afraid and did nothing.

MOJO exclaimed, “A part of MOJO-ing UP is saying that you are going to stand up for what is right; that you can be counted on to do the right thing!”

Director of Project SAFE Shira Berkowitz said, “Every day students are either bullied, bullying, or watching someone get bullied. Even though this topic has been spoken about before, MOJO offered a fresh perspective and really motivated students to get involved.”

One week later, kids in SAFE classes were still buzzing about the MOJO’s call to action: Isaac Malakh, student at Magen David Yeshivah said that MOJO taught him that every person can make a difference. Elliot Kassab said that MOJO inspired him to reach out to other people. Eddie Levy now understands how one person can have a big impact on another person’s life.

MOJO explained that some people who are bullied can turn to cutting, taking drugs, drinking, or even suicide. MOJO impressed upon the crowd that suicide is a permanent solution to a temporary problem; that they should not make a decision that cannot be reversed for a transient situation that will eventually pass.

He said, “Many of you are thinking, ‘I have a good life. This is a nice speech, but it doesn’t really apply to me.’ But know this: you can reach out and help someone in need.”

MOJO told students that he was once asked, “Mr. MOJO, do you really think you can save the world?” His reply was, “I don’t know, but I can change SOMEONE’S world.”