JOE CABASSO SHARES HIS STORY ABOUT HIS STRUGGLE WITH DRUG ADDICTION 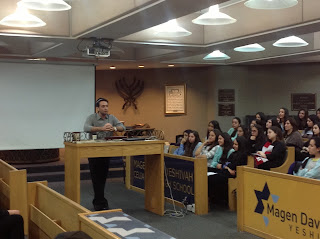 When a crowd of 12th-grade boys is silent in a classroom, you know that there is something very interesting going on. On January 27th Joe Cabasso visited The Yeshivah of Flatbush to tell students in SAFE class about his experiences as a teenager. He said of his visit, “During my entire presentation, you could hear a pin drop.” After he had spoken, the questions came in like rapid-fire. He recounted, “Mainly, the kids asked why drinking or using drugs is bad if it is just a once-in-a-while thing. I spoke to them about what I went through and what I’ve seen.”

Joe  told the kids that when he was a teen, he had so many friends that thought that they were just trying a drug once, but how only a few of those people are sober today. He said, “Most are stuck in a really bad place. It started with drinking. Then, when the drinking just didn’t deliver the same high, they began smoking pot.  Then, they got hooked on pills, etc.…”

Joe said, “I gave an example of how a kid’s first car can be a Honda, and it is so exciting, because it’s his first car. Then, he gets bored and wants a BMW. When the thrill of the BMW wears off, he wants a Porsche. The same thing applies to alcohol and drugs. These substances are extremely addicting; it is very, very difficult to escape once hooked.”

He said, “Many students wanted to know what I would do if I caught my kid drinking or taking drugs. I told them that I hope to think of myself as a parent who will know what direction my child is taking very early on. If he ever did come to me with this news, I’d make him feel comfortable enough to say anything. Right away, I’d get him to counseling and also try to change his group of friends.

“I told the boys that I didn’t understand why the kids I was hanging out with never tried to get me to slow down, even when they saw how much trouble I was getting myself into. Later, I understood that those weren’t my true friends. They didn’t care that I was out of control. If they did care, they would have tried to help me long ago. It is hard to find a true, good friend who is looking out for you.

“I ended by saying that they should try to be a person they themselves would bet on, a person who will be one of the success stories in tomorrow’s newspaper. If they start drinking and hanging out with a crowd that is leading them down a dangerous path now, they will surely not be that happy story in next year’s news. I urged them to aim for better.”

SAFE teacher, Eli Amzalag said that the next week the students still wanted to talk about Joe’s visit. “We spoke about how to create a barrier to protect oneself from getting involved in drugs, about finding friends that bring them to a better place in life and not putting themselves in situations where they have to exercise restraint. We also rehearsed replies that they’d feel comfortable enough saying if offered drugs.

“I find that Joe’s visit really hit home. He spoke about places and scenarios that the students are familiar with. He also detailed what he was experiencing at each age, so the boys were able to compare and contrast their development with his.”

Eli continued, “Everyone believes that he is not going to be that person though; that nothing is going to happen; that he is strong and that the substances will have no lasting effect. They point to examples of men who do drugs but are still successful in the business world, but I tell them that for every success story, there are many more with failed marriages, who are unhappy, and who are struggling to live a productive life.”

Eli’s message to parents is: “If you know that your child is using, don’t be afraid to take action. Many parents fear that if they make a fuss, the news will get out and their child’s name will be tarnished, but the way I see it, it is better to risk this exposure than to allow him to continue on a path that will surely be more tragic.”

Joe said, “I was so impressed with the SAFE teachers; we are so lucky to have them working with our community’s kids. They are so knowledgeable, loving and understanding. If I had a program and mentors like that when I was in high school, life would have been very different.”