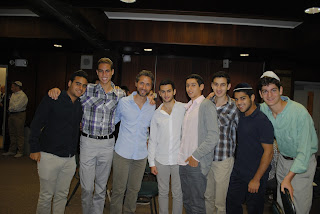 “Every time I think about what happened, I feel that I lose a piece of my heart… The thought of it is just too difficult to bear. Every morning I wake knowing that I there is nothing I can do to repair what I have done.”

Ike Chehebar spoke these words during his presentation to 10th graders at The Yeshivah of Flatbush this May, recounting the event in 2001 that changed his life forever. Students listened attentively.

He said, “It was a beautiful afternoon when I took the wheel; the sun was shining; the tunes were pumping and my adrenaline was peaking…I saw the light turn to yellow, and I said to myself, ‘I can make it.’ So I floored it, but I failed to see the turning car from the opposite side of the traffic. I had a choice to either crash head-on or turn. Frantically, I turned the car toward the sidewalk, but there stood a family, whose fate I changed forever. On that afternoon in April, my actions killed two little girls and critically injured their mother, all as their father looked on.

“I did not set out that day to be a killer, but that was the direct result of my recklessness. Back then, all of my decisions were impulse-driven; I always drove like that, but boy, do I wish I would have acted less selfishly. Now, I try to be more deliberate and thoughtful. In life and on the road we need to be respectful and care for those around us. The road is there for all to share and as such we have a responsibly to all motorists to drive carefully.”

Chehebar went on to discuss something that he believes is important to address. He said, “We must be wary of ‘the cool factor.’ ‘The cool factor’ is a dangerous dynamic that teens will aggressively chase after at all costs. But watch out for it, because it can get you into major trouble, as it did me.

“I thought I was the best and coolest driver on the road, that I was invincible; that nothing could ever happen. But it happened.”

When asked what he now thinks of as “cool”, Chehebar said, “Becoming more educated and being around smart people. Before the accident, I never read; now I read a lot. My motto is: A.B.G., Always Be Growing – in all areas of life; if you are not growing you are falling. Try to stay with people who will help you grow.”

As Chehebar urged students to take this productive path, he explained how pursuing “cool” led him to much suffering, 6 months in jail, 5 years without a license, performing 2200 hours of community service, and of course waking each day with the painful knowledge that he killed two innocent lives and destroyed a family.

When speaking of the Victims parents Chehebar said, “They are generous, benevolent, good-hearted people who have allowed me to walk free, so that I can educate the youth and show them how dangerous driving can be. I owe them my life and will forever be indebted to them.”