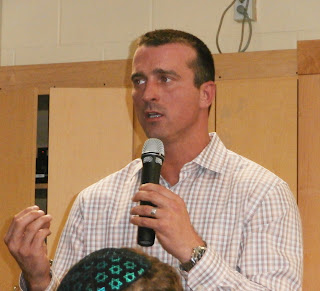 May 6th 2013 began as a typical Monday at Hillel Yeshiva – that is – until guest speaker Chris Herren, sponsored by The SAFE Foundation, arrived to address the student body, faculty, administrators, and parents. Herren, a former NBA basketball star, who after spending years in the grips of addiction, is now sober and sharing his story with high school students, college students, and coaches all over the country. Rabbi Howard Bald, Head of High School, began the program by explaining the concept of Teshuvah, a person’s return to a healthy path.  He said, “We are inspired by people who have dealt with obstacles and have overcome them.”
Herren began by telling the students that he was once their age, sitting in a school auditorium just like them, listening to a speaker warn against the dangers of drugs. He said, “I remember thinking, ‘My future is bright. I’ll never be that guy. All I do is drink and smoke on weekends with my friends.’ I thought I was above it and that all those warnings did not pertain to me.”
Herren was a high school basketball superstar who played for the Denver Nuggets and the Boston Celtics. Growing up in Falls River, Massachusetts in a middle-class family, he had no idea his life would plummet into a nightmare of substance abuse. Herren graphically detailed his experiences as a college student. He described how he casually tried cocaine for the first time; was drafted to the Denver Nuggets as he tried to hide his addiction to Oxycontin; was traded to the Boston Celtics where he began mainlining heroin; and how saying yes to drugs sent him on a downward spiral that ruined his career and the life he had dreamed of as young boy. Explaining how addiction led him to so much loss and pain, he said, “That is how sick the monster becomes.”
When Herren accepted his first yellow pill for $20, he never imagined it would turn into a $25,000 a month addiction that would rip his world apart.  It was only after he hit bottom that he accepted the help he needed to turn his life around. It was August 1, 2008 when he finally fell to his knees and prayed. He told the crowd, “I have been sober for five years now, and I am grateful for every one of these days.”
When asked by one student if he drinks socially, Herren responded, “There is no casual drinking in my DNA. For me, it’s never just a couple of beers. I do not even take cough syrup!”
At one point, Herren stared right into the audience and asked, “Why is it necessary to go to a party and use a substance? Why can’t you just be you?”
Herren has dedicated his life to speaking to kids in the hope of making a difference to just one kid. He has also created The Chris Herren Foundation and Project Purple to assist individuals and families struggling with addiction and to bring awareness to the dangers of substance abuse. Last year alone the Chris Herren Foundation was able to get help for hundreds of people.
At the end of the lecture, Herren invited the students to reach out and email him with questions or requests for help.