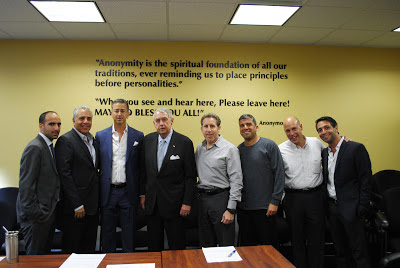 On Wednesday, May 1st, 2013, Brooklyn District Attorney Charles Hynes visited The SAFE Foundation. He told board members and staff members alike, “I am so glad to be here today. I love working with the Sephardic and Jewish community and with the Founder and Executive Director of The SAFE Foundation, Ike Dweck. You are great people who really care about what you are doing.”

Ike Dweck said, “For about 9 years, we have worked closely with the DA’s office to rehabilitate those with addiction problems. Our ultimate goal is to help them be productive members of society.”

“‘Catch and release’ should also be for felons not only for fish,” the DA said, citing one of his favorite quotes. These are words he often uses in support of the Kings County Drug Treatment Alternative-to-Prison Program he launched 23 years ago. This re-entry program offers offenders with substance abuse problems a way out of the perpetual cycle of addiction, crime, and incarceration. He said, “This program has changed how we prosecute those who suffer from addiction. As a man of faith, I believe that it is the responsible thing to re-engage and rehabilitate people, allowing them new and healthy, productive, law abiding futures, rather than throwing them into correctional facilities that do not seem to correct anything.”

He continued, “We are finally learning, after far too many years, that we cannot prison-build our way to a safer society.  If untreated addicts are released from prison back into the community, the deck is stacked against them and against the community.  Driven by a need to support their drug habits, far too many of these individuals end up re-incarcerated, hurting both their community and themselves. It makes more sense to give those in need counseling, job skills, and support to become healthy, functioning members of the community.”

SAFE’s Program Director, Roy V. Tellis, CASAC, said, “DA Hynes is an extremely wise man, and I am honored to welcome him here today. He is proactive in his support of addiction recovery. When he brought the re-entry program to Brooklyn in 1990, five out of ten offenders were sent back to jail within three years of their releases. The numbers are now two out of ten. This is remarkable. The DA made two statements that I believe are important for all to realize. He said, ‘Hating anyone is wrong.’ and ‘Drugs are about death.’ I look forward to the continued relationship between DA Hynes and The SAFE Foundation and adding to the numbers of our success stories.”